Run, jump, and spin through Silver Sonic's robot army looking to take over South Island and stop its plans to supercharge the Frenzy Egg, Silver Sonic's powerful battleship that was build from the remains of the Death Egg!

Rather than find the chaos emeralds himself, Silver Sonic kidnapped Tails and has held him for ransom. The price - 6 chaos emeralds!

Sonic will need the power of the chaos emeralds (Hidden in the second act of each of the first five zones) to reach the Frenzy Egg and save his buddy.

7 zones await you in this game!

Emerald Isle Zone - The place Sonic was hanging out at before learning of the Frenzy Egg and Tails' kidnapping, this seaside hill is full of bridges and pogo sticks to reach higher elevation!

Marble Casino Zone - As night falls, Sonic finds that Marble Zone's upper areas have been turned into a Casino! Ironically, this new casino has become abandoned itself, save for the badniks that want to keep you away from the ultimate jackpot: the yellow chaos emerald! Can you keep up with the pinball flippers and dice blocks?

Chemical Flow Zone - A plant that makes chemicals flow, Sonic will need to smash chemical containers, speed on tubes, and avoid the dark blue chemicals at all costs! Staying above the transparent purple chemicals would be a good idea too, since Sonic lacks his signature speed underwater!

Stardust Speedway Zone - The fastest place around, Sonic will need to dash through enemies and tubes to find the white chaos emerald that somehow ended up on Little Planet. Watch out for the spiked platforms in the lower parts of the levels!

Thundermountain Zone - A mountainside castle, with a big green storm coming soon. Sonic will need to jump from windowsill to windowsill while avoiding spikes, spears, and flying lobsters to get around!

Frenzy Egg Zone - The battleship the game's named after, this place is full of electrifying traps, moving platforms, and conveyor belts! Silver Sonic awaits you at the heart of the battleship!

Spring - Places a spring in the monitor's place

Nega Ring - Sets your ring counter to 0 (Avoid them if you can!)

Sonic Frenzy is full of alternate paths and secrets, so it's reccomended you play it through multiple times to fully appreciate the game's 21 levels!

-Every zone has a new palette, tileset, mappings, and layout change

-Some objects also have new tilesets

-Music has been shifted around and some have been modified 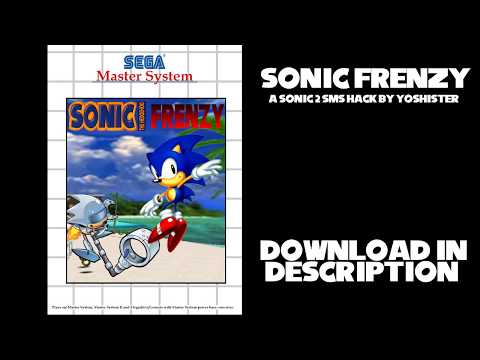 GG/SMS hacks are so uncommon (at least in comparison to the amount of Genesis hacks) it's crazy seeing one as complete as this one. I haven't played it till the end yet but it seems very promising, so kudos!

This was the first SMS hack I have played and was not disappointed. What I love the most is that you actually give your players rings against the boos! Thank you!

Why do the yellow circle paths on Frenzy Egg remove your ability to jump?

This is one of my favorite entires in 2020, and it's impressive to play a fully complete Master Syster hack. I hope this isn't the final version, because there are a few things that could be fixed.

For those playing on a Mega Drive and using an old Ever Drive, the START button does not pause the game. It would be nice if this could be added. It is possible, with more details here: https://www.smspower.org/forums/15107-HacksForUsingMegaDriveControllersInSMSGames

On the title screen, why not replace the 2 with the word FRENZY? It would look so much more professional.

On Emerald Isle Zone, some enemies would be inside the terrain. I think this occured in the demo you made, which redhotsonic show cased in a video.

In Apricot Bluff, the hopping enemies would load the Hang Glider graphics. It also took a long while to figure out you jump and hold the direction to go on the green platforms.

Thundermountain Zone Act 2 was the most pain in the neck level. I swear the blue swining platforms don't always appear, and the fact Sonic isn't quite centered in the screen, when you jump, it's difficult to see where he lands.

On Chemical Flow, it wasn't clear that the blue water = bad, green = good. I know Sonic Mania does this, but that game has boils to represent it's bad. Here it's the first thing you come aross, and I lost a life trying to bounce off it. Maybe include a danger sign for the first enounter of the blue water?

I may make a video of me playing this hack. Hopefully it may show the issues that need fixing.

This is awesome! Good job Yoshister!

Apparently I accidentally overwrote the level data for Frenzy Egg Zone in the SHC build and I didn't notice until watching some video about it like 3 months later.