This was a mod I worked on throughout the summer. Initial testing was in I believe 2019, and full production began sometime earlier in 2021. I actually pulled several all-nighters in a row while working on this, a first for any of the mods I worked on. I even had to play the original version of the stage multiple times so I could try and get this mod right. Despite this, the mod was one of my smoothest productions to date.

After many instances of trial and error when it came to the terrain, I created my own workflow that allowed me to not only keep the UV mapping for every mesh intact, but also let me keep vertex colors as well, and save a lot of time renaming and applying materials and whatnot. Of course, I had to manually do the secondary UV channels so I could render GI.

The lower path in the 2D section has been made completely inaccessible due to no drill wisp, so I moved two of the red star rings. See if you can find them! Also, all of the splines used for the grindrails and 2D sections, as well as the main camera, were ported directly from Colors.

GI was rendered using Skyth's HedgeGI tool. I wanted to keep the stage bright and colorful, so I set the environment color accordingly. Emission materials (used on the welcome signs and grindrails) were taken from the original game, but I increased the exposure in Photoshop so they could actually glow. Also, all of the specular maps were converted to PBR maps so they properly work in Forces.

The cubemap (main reflection) was taken from the final boss' third phase. Felt it was fitting for a stage like this, since it's pretty much in the depths of space.

I was not able to make the skeletal meshes work properly, due to my lack of knowledge of 3D animation, and trying to convert Nintendo animation file formats to Havok (neither of which I know about), so I was left with having them completely static.

The avatar version of the stage was essentially a very last-minute decision.

Overall, I'm fairly satisfied with the end result of the mod. I actually gave it my all, and I'm hoping it shows for the most part. Have fun!

- UV anims don't exactly work properly. This means some signs are animated, others are static.

- There's no skeletal animations for the ferris wheels. I have no knowledge on converting animations whatsoever, so that's why they are static meshes instead.

- Sometimes, jumpboards will make you go off-center. This issue doesn't happen too often on my end, and I'm not sure exactly how to fix this. All I can say is, when you approach a jumpboard, make sure it's the center one, and hold the Left Stick all the way up when doing so!

- The skybox is kinda weird. I had trouble with getting it to properly show up in-game, so I had to delete the white glow from the mesh. Also, the planet is smaller than it should be, which is unfixable.

RobowilOFFICIAL: Pretty much everything involving the mod except for the tools used. 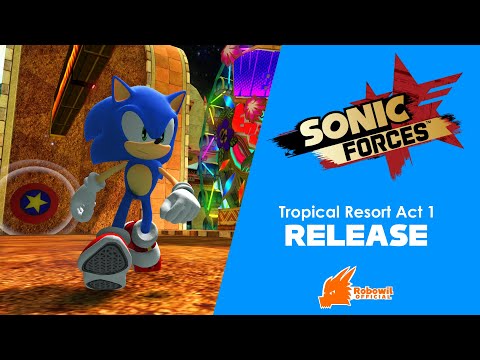