The year is uh...When does Sonic 2 8-bit take place? Well, one month after that. Sonic defeated Robotnik in Crystal Egg Zone to save his friend Tails, as well as all the Master Robots that the egghead made. Eggman, furious at the defeat of his robots, sends them into Labyrinth Zone, making them malfunction and explode...Except for Silver Sonic. Silver Sonic, seeing his friends being killed by their own creator in such a cruel way, sets quest to reach the mad doctor's new base, and put a stop to his evil before Sonic himself, for the sake of his robot friends and to make Scrambled Egg Zone a beautiful natural landscape once more.

So yes, in this hack, you control none other than a vengeful and justice-seeking Silver Sonic going up against his egg-shaped creator in this hard and dangerous adventure! The hedgehog double will have to go through the badnik and trap infested zones of Scrambled Egg Zone, whose lower areas (As explored here) make for a beautiful Green Hill-esque purple paradise, Temple Zone, an ancient temple built on an actual volcano, rumored to have been constructed and inhabited by a very ancient race of humans who had very big muscles and were looking for a red stone to become the ultimate beings. You will also visit Lethal City Zone, previously the hometown of disco, but polluted by Eggman's machine gas and bumper jumping sections, and Moon Light Zone, the not-so-distant pink and green cousin of Star Light Zone, where Robotnik seems to use as storage for his bomb badniks. Yikes. After that, you will finally enter the mad doctor's new base, Egg Base Zone, which...Well, I will not spoil the surprise for you, but let's say Robotnik learned how to make a secure hedgehog-proof base.

So, are you ready for the challenges, traps and platforming sections within?

(Actual Hack Info: This is my first fully fledged Sonic ROM hack I have made with my friend TheLesha, with whom I have already made Doom 32x: Delta, a Doom 32x ROM Hack that brings it on par with PC Doom. This hack was made to be a sort of sequel to Sonic 2 8-bit if Silver Sonic had decided to rebel against Dr. Robotnik and kill him before the events of Sonic Chaos. It was made in a month of very hard work. And thanks to TheLesha, we were able to modify the zone names, import custom graphics for the title screen, Eggmobile and such WITHOUT a disasm. Hell, we even managed to have not one, not two, but TWO splash screens as well! So yeah, it's your usual no disasm hack, with changed instruments, palettes and level layouts, but I think we did a pretty good job. As for the difficulty, well...The hack was made to be pretty challenging, with things such as bumper jump parts in Lethal City, and most bosses featuring no rings and modified room layouts and such, to make them way more challenging than in vanilla Sonic 1. Nothing too Kaizo, albeit the final zone (Egg Base) is a very challenging one, but hey, the final zone in the game has to be more challenging than the rest, no? Anyways, we hope you have fun.) 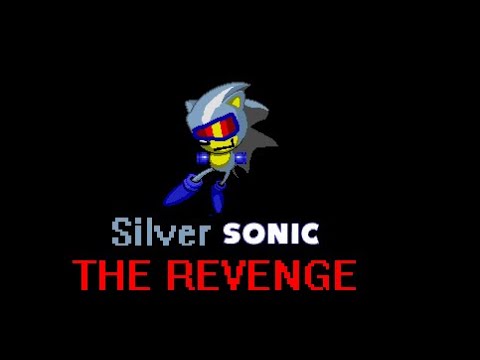 If the Hell Zone levels are not complete, why didn't you set the rom up so it goes from Scamble Egg to Temple Zone? <_<

This ROM hack is really poor in quality. Silver Sonic's sprite art, the color choice for the palettes, the spammy object placement, I can not find a single aspect to praise. I could not be bothered to play past GHZ act 2 due to the frustration I received from this hack.

How many badniks do you need? lol

Seeing as this hack was made under XP and ESEII, it looks alright. The issue is... why challenge yourself to that? It's easy to set up a Hivebrain/GitHub disassembly and SonED2. I'm sorry but this hack is underwhelming to play and I'm not sure if I should record gameplay of this. =(

Well, I guess I managed to get the "frustrating" part alright...I don't know if I managed to make people like Silver Sonic more though...

I wasn't too fond on the overall execution of this if I'm being honest. The character's sprite work feels a bit incomplete and janky at points, like the walking for instance. The level design felt kinda cheap at points like the abundance of bottomless pits in GHZ 2. Though I do still see some potential this.

I like the idea that you play as Silver Sonic, but I think this hack has a lot of worked needed to put into it. The colors aren't very good, the badnik placement is more annoying than challenging, and the added spike bug glitch makes me feel this is just meant to be another cheap kaizo hack.

It has a lot of potential,but wayyy too many enemies and the color palette needs work