Sonic 06 Definitive Experience is a mod for Sonic Generations that featurees original models, animations and physics from the game Sonic the Hedgehog (2006). This is not just an ordinary character skin mod, with the help of recent development of code injection, this is also a proof-of-concept mod that creates new movesets to Sonic Generations by bringing back character movesets from Sonic 06!

This mod does NOT contain any stage mods, while not mandatory, you are highly recommended to play this mod alongside with STH2006 Project Demo 5 which is available in Expo. While 06 physics is playable in most Generations stages, STH2006 Project contains stages that are more suitable for adventure style gameplay this mod offers, you must put Sonic 06 Definitive Experience higher priority in HedgeModManager. This mod only works with HedgeModManager, SonicGMI is NOT supported!

In the current version of this mod, you will be able to play with 06 Sonic or 06 Sonic+Elise characater model, both fully capatible with English and Japanese voice-over. But most importantly, most of the physics and character movesets from Sonic 06 has been recreated in Sonic Generations with code injection (only less buggy!), here are the list of main tecnical changes (if you have played Sonic 06, this should feel right at home):

For the purpose of this contest, 06 physics, character movesets, button mapping, R-stick camera control and various technical changes are turned on by default, you can change the mod configurations via HedgeModManager.

Lastly, we hope via this mod will encourage modders to create level mods not only for Boost style gameplay but also Adventure style gameplay! 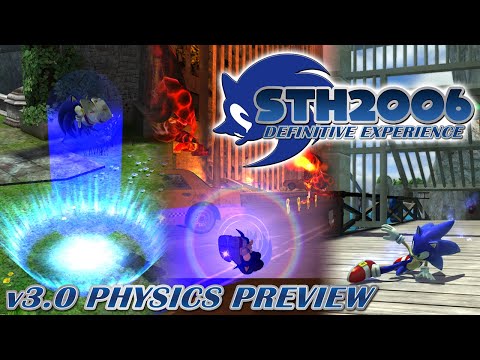 I've been experimenting with these 06 physics and controls in all kinds of levels you're not supposed to use him on, and it's just... so funny how clunky and slow he can be, when it's not in the STH2006 Project. It is scarily accurate to normal 06, I love it.

lol, well you do have the option to turn 06 physics off if you wish to play with Gens stages, while keeping the new movesets

That's great too, of course!

I just find it really amusing with the 06 physics on. xD