It's the Sonic 1 we all know and love*, but with the addition of the character of Sonime, an avatar who reacts to your gameplay in real time. Her expressions have been fine tuned to reflect your inner reactions to game you're playing. She'll be joyous if you reach soaring speeds and maneuver through several badniks in a single jump. She'll watch in terror as the only thing keeping you from death is a few invincibility frames. She'll scowl at your failings, be shocked by a sudden crushing, and even get annoyed at those god-forsaken special stage crystals. Every feeling you have will be reflected so accurately, that you could've sworn Sonime had a direct link to your soul. Though the game remains unchanged, she becomes the focus, pushing aside Sonic as the star of the show, and with the spotlight stolen and your attention split, you may find your ability to be unlike what it used to be.

This is Sonime the VTuber in... VTuber in Sonic 1 v2 (Based on a mock-up by Kilo)

- This hack is proof that Sonic's palette can be loaded for the entire game (sans the Sega and SHC screens) without major graphical drawbacks.

- Almost all bubble spawners have been removed for the sake of player convenience.

- Press B while paused to toggle Sonime's voice (on by default).

- If you're some kind of weirdo who isn't fully immersed by just playing Sonic 1 with slight changes, secrets have been added, which are portals to reality altering wormholes which are totally not just advertisements to the awesome places I like to hang out in.

*okay, maybe not, but I couldn't help myself, plus some optimizations were necessary.

Super Egg - How to Optimize Shield Art Loading in Sonic 1 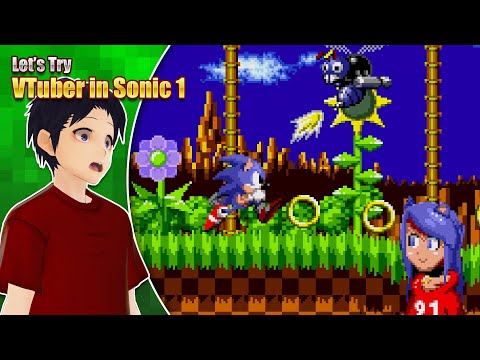 The workaround used for the water palettes is very clever, I was very surprised when I saw it! I was expecting Sonime to just go underwater too.

finally someone can play Sonic 1 with me on weekends

I remember checking this one out last year and I loved the idea! Also I do like the smart use of shadow and highlight mode for LZ as a workaround for the water as someone else mentioned. Sadly, I don't have too much to say other than that.

Interesting technical achievement, and even wants me to build an AI into Sonic to shout at you in real time when you suck. Sadly I'm not into the VTuber culture at all (so can't understand some stuff), and Sonime's voice gets real annoying at times...

this is actually pretty cool