Sonic Riders Regravitified is a competitive-aimed mod, and major rework to the systems of Sonic Riders Zero Gravity. The mod also incorporates a variety of quality of life improvements, in addition to dyrastically speeding up the gameplay.

Extreme Gear Labs is the community for "Sonic Riders DX" (a mod for the original Sonic Riders) and "Sonic Riders Regravitified". They host content for both games in the form of tournaments, speedrunning, textures, competitive discussion, and modding. You can join the community here: https://discord.gg/6xwfaZc

After just place the textures in the folder that you want to use and make sure Dolphin has Load Custom Textures ticked in it's configuration.

- Character Type Shortcuts are now tied to characters (Such as Sonic being able to grind on rails) opposed to being determined by the gear or gear changes. The Gear Changes that used to give shortcuts now give stat benefits instead.

- All gears can inherently slipstream off of one another instead of it being exclusive to Yachts.

- Players can now use the Z Button to cycle between Gear Changes that are currently available for purchase.

- Players can now spend GP to Boost by pressing the L Button.

- Players can also spend GP to lay a trap called a GV (Gravity Void) by holding back on the control stick and pressing the L Button. NOTE: this feature crashes hardware.

- Players can drift on the ground by holding a direction and holding the X Button.

- The trick system has been replaced with a Charge Jump trick system. Hold the A Button to charge your jump. Depending on how long you charged for and where you jumped off the ramp will determine your Trick Rank.

- Charging jump Cancels your Boost, allowing you to take your Type Shortcut with a Fly or Speed Type. As such, Power Type can now Boost through Power Objects.

- You are now able to Attack other people in Boost State! You also gain GP (Rings for a Ring Gear) for every other character you hit, even if they aren't Boosting.

- Gravity Dive Rings left behind from someone Gravity Diving now give GP when they're used to make up for any lost Meteorburst Objects.

- Ring Gears have been completely recoded, don't drain rings when taking type shortcuts anymore, start with rings, and much much more.

- There's an option to check for updates in the Main Menu, and you can update your version of the mod online from within the game. NOTE: This does not work properly on hardware.

- Boots the game to the Main Menu instead of the Title Screen with everything unlocked by default.

- You now start the race with full GP always, unless you're a Ring Gear, in which case you get 30 Rings.

- Reduced Control Lock from various things such as Fly Hoops, Dash Panels, or Bonking on a wall.

- Changed Meteorburst Objects and Gravity Dive Rings to give additive speed instead of setting your speed.

- Several Bugfixes such as making it so Super Sonic doesnt lose collision after attacking someone, or disabling the water in Tempest Waterway from messing with your rotation while you drift.

- While Type Shortcuts are tied to characters instead of Gears now, Gear Changes like Air Ride or Bike are not useless! They give various stat bonuses based on what type they are now instead.

- The Cover Series of gears (Cover S, Cover F, Cover P) still retain their ability to grant a type shortcut, but now, if you use them on the same character type, it supercharges your Type Shortcuts

- Light Board is a unique gear inspired by Free Riders. Instead of Gear Changing, it Gear Switches using the Z Button. instead of Boosting, it Kick Dashes, having instant accel, and the speed lasts and increases based on your Level. Yep, this Gear also Levels Up, 1st by reaching 60 or more rings, then again at 120 or more rings.

- Beginner is another gear that levels up, but lacks the Gear Switch or Kick Dashes, but as a result, it can attack!

- Shooting Star has been given a Custom Special Effect to where it has no start up to it's Gravity Dive, inspired by Zero Gravity's Battle Mode.

- Balance Changes and more in the patch notes

- Firstly, you will need a good dump of Vanilla (unmodded) Sonic Riders Zero Gravity NA Wii .wbfs or .iso. Note, it cannot be a .nkit.iso. How you get it is up to you.

- Secondly, you will need the patcher you can download here. Extract the .rar into the folder inside.

- Fourth, use the select file button next to Output ISO and select where you want the new patched .iso to go. under File Name, name the file "SRRG1.0.iso" and select Save.

- Fifth, Hit the "Patch!" button, select OK on the popup and wait for the command prompts to finish. You will get a pop up when it's finished.

- Sixth, the .iso file "SRRG1.0.iso" you have needs to be run using an emulator. It's recommended you use Dolphin Emulator.

Note: None of these codes are required to play Sonic Riders Regravitified and are either entirely cosmetic or for fun. They can be ran as Gecko codes in Dolphin Emulator.

Always have your Gear out / Gear never goes in compact mode

Super Sonic is His Own Character

To use Japanese voices 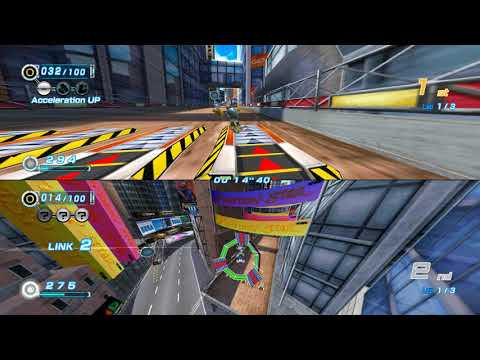 There exists a bad dump of Zero Gravity that's shared around out there; it is recommended you dump your own copy or grab from a trusted source. Patching a bad dump will likely result in a black screen.

This is what a true remastered Sonic racing game really feels like. I love it and I have doubts about it.