Do you remember Sonic Delta 40mb? It's a popular ROM Hack created by Neto, where you get to play Sonic 1, 2, 3 & K in one ROM. Quite some beta elements were sprinkled into the ROM, such as unused levels from Sonic 2 and early music from Sonic 3. Do you also remember Sonic KawariNo? It's a ROM Hack created by MrLord Sith, where many of Sonic 1's beta elements and concept art were taken into account and the difficulty has been balanced. I think it's time to kick things up a notch.

Inspired by both Sonic Delta 40mb and Sonic KawariNo, I present to you... Sonic Vintage! This Sonic Mania mod combines these beta elements into something completely different. In this first demo, here's what's in store:

1. Green Hill has recieved some big changes. The purple sunflowers have returned, as well as the checkered balls, whereas they are actually useful this time around. Act 1 is based on the Nick Arcade Prototype version of the first two acts of Green Hill Zone with a custom transition between levels and a completely different underground area. Act 2's layout takes the Tokyo Toy Show approach to a raised level. While the layout of Act 2 is identical in the first half, it's the second that makes a big difference. The big golden rocks now sit around the level. Remove the big rocks to reveal hidden stuff! Also added are little bushes, and one mysterious sign! Act 1's music is from the Nick Arcade prototype of Sonic 1 and Act 2's music is from the TTS Demo of Sonic 1.

2. Chemical Plant takes on the Nick Arcade approach with its magenta colored industrial area. Only the first act is playable, but the layout has big changes. From the original Act 2's spawn point, it's a mad dash to the goal area of the original Act 1. In short, it's a seemingly backwards version of Mania's Chemical Plant Act 1. The Simon Wai prototype music for the level is heard.

3. Flying Battery takes place at night. Also, the old background is there. The prototype music for both acts of FBZ are heard here.

4. Stardust Speedway once had parts of the Past palette blue in development before they were changed to yellow. This has been reverted to reflect how it looks in the Sonic CD 510 Prototype. You also get to hear the old time warp sound from the 0.02 prototype. Pretty cool, eh? The first act is only playable in this demo.

5. Only the Encore version of Green Hill, containing both acts, is present, but only through the Dev Menu. Basically, I tried to make Green Hill take place at night time. The unused palette from the Sonic 1 Prototype depicts GHZ at night. A similar palette is seen in the MegaPlay version.

6. The only things I did to Angel Island were to replace the music with the prototype version, and open up the alcove near the start. I also threw in a secret uppermost area that's kinda tough to reach unless you time your jump well with a fire shield of some sort. You can actually play this level, but when you see the capsule at the end, go back to the menu screen immediately using the Dev Menu. Thanks. 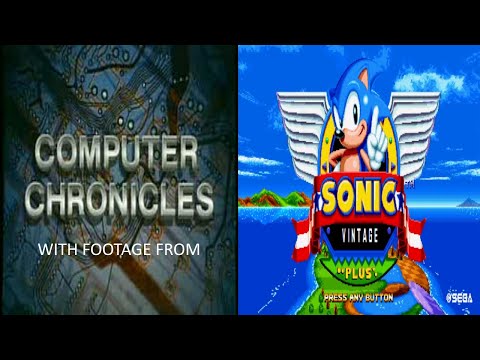