Sonic CD Restored is a fangame that primarily aims to recreate the original glitchless speedrun experience of Sonic CD on the Sega CD, often referred to as CD93.

I was the fastest CD93 player in 2010 (full game runs), and I'm the fastest CD11 player today. (Not in full game runs; but I hold the highest amount of Individual Level world records/shortest "sum of best segments" as Sonic, though Tails is in fact the faster character.) It was always my dream to bring back the true routes of the game that we lost when the 2011 version (often referred to as CD11) was released.

CD-R adds Amy as a playable character, 720p remastered FMVs, 500 Kbps music, 16-bit SFX (up from 8-bit that CD11 used) and undoes the hardware limits that forced Sonic CD to use the Z80 processor for its SFX instead of the PSG chip. A handful of non speedrun related UI and gameplay restorations have also been made; such as the black titlescreen fade in, CD93 titlescreen codes, the Quartz Quadrant foregroound crystals, and Stardust Speedway 1's roads no longer trapping the player in a small space towards the end of the level.

Sonic CD Restored continues the pattern of each major Sonic CD release containing its own OST. The Mega-CD version had the original JP OST, then the Sega CD had its own US OST, and finally the 2011 version received unique mixes done by Christian Whitehead for both OSTs as well. CD-R cherry picks the best tracks from the JP and US OSTs to make a Hybrid OST, available in two different variations: Arrange and Unified. The intention is to let a player experience what the OST may have been like had the JP and US sound teams collaborated with one another in unity. Arrange moves four tracks to other levels considering the stage backgrounds and ambience of the levels, while Unified simply cherry picks the JP/US track that belongs to each stage. In the instances of Palmtree Panic Present, Tidal Tempest 'G' Mix, and the Special Stage, we weren't able to subjectively agree on which track was better, and an attempt was made to compromise. Beating the game as Amy unlocks the option for a Custom OST so the player can choose between all the JP/US/Hybrid tracks, and even a couple beta tracks for them to make their own ideal soundtrack.

While most of the 100+ CD93 restorations may be difficult for some players to notice, everyone will be able to notice that Sonic CD Restored also implements Instant Time Warps. This feature is based on Naoto Oshima's Time Warp development sketches; programmed by TheStoneBanana. This fundamentally changes the way Time Warping in Sonic CD is performed, requiring you to execute a Super Peel Out, Spindash, or Drop Dash to trigger the Time Warp timer. The Time Warp timer is now 60% shorter than CD11's timer, and about 30% shorter than CD93's. Coincidentally enough this allows players to find previously inaccessible secret areas which happen to only be accessible via thew new instant Time Warp. One such area is in Metallic Madness 2, where you can Time Warp to the Past to find a secret room with 40 rings, and a spring to return you to the normal gameplay area. Beware warping to the Future there however, the same room exists, only with no exit!

Along the speedrunning side of things, Restarting a stage from the Pause Menu no longer takes a life. This lets you time attack stages with far more ease, restarting as many times as you like. Time Zone Select is a new feature that will let you play the game with each level starting in the Past or Future, so all 78 levels in the game can finally be easily accessible and the full potential of the replay value in Sonic CD can be experienced. Special Stages now feature an In Game Timer, so All Time Stones runs are no longer timed differently from the other categories. Sonic's Special Stage turn radius and the bigger UFO hitboxes have both been restored from CD93, and so everyone; speedrunner and casual player alike, will find these special stages responsive, fun, accessible, and even "too easy" if one can imagine saying that about a Classic Sonic special stage.

Sonic CD Restored added the Sonic Mania Drop Dash to keep parity with Sonic Origins' own Sonic CD moveset. A player may enable this in the normal Settings menu underneath the Spindash setting. Other than that however, CD-R is trying its best to stay faithful to the original Sonic CD gameplay experience. You won't find six pages of gameplay options, you can't disable the Sonic CD extended camera (which now works as originally intended, allowing a player to outrun the camera or a spindash holding the camera in place for a few frames), I didn't make the game easier by slowing down the Lighbulb Badniks or giving away the location of Wacky Workbench's Robot Transporter, and sadly I didn't add in any Game Genie codes to let players Moonjump like the good old days. ;p

I did however, include an optional mod that removes every ring from Metallic Madness 3, giving some players the more typical Final Boss experience they have been craving. Psycho-Egg: Hard Mode removes all the rings from Metallic Madness 3 and challenges the player to defeat Dr. Robotnik without taking a single hit. While I was at it, this mode also restores a few things for the Pycho-Egg boss as well, which was originally much harder to defeat in CD93.

CD-R is focused on speedrunning, so lastly like to talk about the new Results Summary / built in Autosplitter. When a player completes a full game run in CD-R their in game stats will be displayed. It will show you your Total Play Time, Final Score, the amount of Time Warps performed, Robot Transporters/Metal Sonic Projectors destroyed, Deaths, your childhood landline phone number, etc. as well as a detailed history of the times you achieved on every level, including in-game-timed logs of when you restarted a level, exited the game, or died. 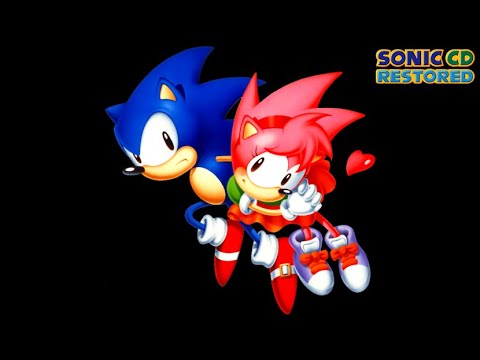