This is a relatively small-scale mod that I did that swaps out Classic Sonic's model with Classic Metal Sonic's from Generations/Origins. A few edits were done to the model so that it would perfectly fit the skeleton, but otherwise it's pretty much exactly what the title says. I started production on this mod in June 2022, when Sonic Origins released. In the menus, Classic Metal Sonic has a PBR material map, so I decided "hmm, maybe I should make a Classic Metal Sonic mod for Forces". So I decided to do that, and production ended about a month later. I've also included a Super form, based on his appearance from the web series Sonic Mania Adventures. Oh, and I also changed the slot machine textures to replace Classic Sonic on them with Metal Sonic's flag icon from Mario & Sonic at the Olympic Games: Tokyo 2020. And last but not least, the goalpost was recolored to match Classic Metal, though my in-universe explanation is that Classic Metal got bored and decided to vandalize the goalposts.

I have also replaced the jump, skidding and spindash charge/release sounds with their Sonic CD counterparts. In addition, the invincibility music has been changed to the Japanese Sonic CD Invincibility music, and the Classic Super Sonic theme was changed to Stardust Speedway Bad Future (JP).

Keep in mind, this is NOT an Episode Metal mod, and I will not be bundling this with Beatz's Modern Metal Sonic mod either. This is it's own standalone thing that I did for fun! 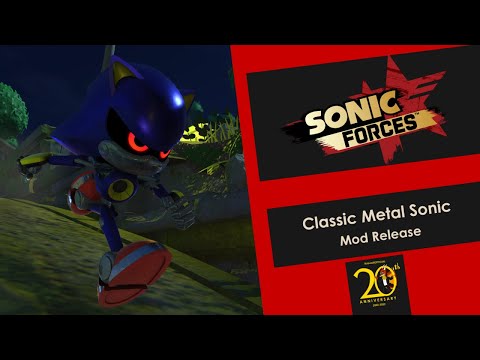