After a long time of dealing with Amy as either the worst character in 06, or as a Sonic clone, it's now finally time for her to shine! Thanks to the incredible programming work by Rei-san and lua editing and custom animations from myself (based on those awesome ones Chara made me for the original Amy Rose Improvement Mod), Amy's finally what she's always meant to be!

Instead of being based on Sonic like my previous Amy Improvement Mod, she instead uses a heavily edited version of her own moveset.

Other changes include an Adventure/Advance-style fast running animation (sadly, no way to make her hold her hammer during it), particle fixes, and general movement improvements based on those used in Legacy of Solaris, which this mod is fully compatible with!

This mod is still in development, so keep an eye on the Amy Rose Improvement Mod GameBanana page for updates on it after the Expo is over!!!

Make sure to load this mod AFTER Legacy of Solaris, or any other mod that affects Amy! Amy's hints in her Dusty Desert and Kingdom Valley don't match up because they're intended for the version of Amy included in LoS, based on the original Amy Rose Improvement Mod. 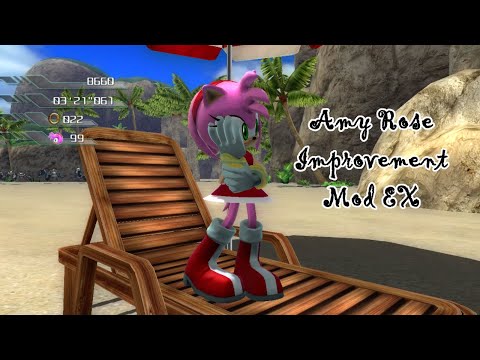